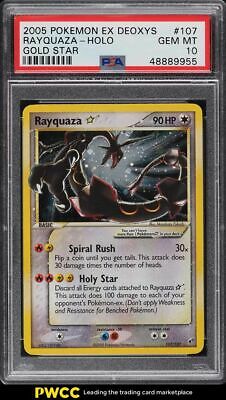 Introduced as a special chase card for the Pokemon Trading Card Game, Gold Star cards have a pull rate of only one per every 2 boxes, and as such command tremendous premiums as a result. The Rayquaza Gold Star from Ex Deoxys designed by Masakazu Fukuda is widely considered to be one of the most breathtaking and coveted Pokemon cards ever created. With Ex Deoxys booster boxes ranking among the most expensive Pokemon booster boxes, this card is next to impossible to acquire from a pack any longer. Featuring an illustration of the legendary dragon that seems to jump off the card, and an absurdly low PSA 10 population of only 46, it is considered a holy grail of post Wizards of the Coast Pokemon trading cards. An incredible chance to own a piece of Pokemon history, this card rarely ever surfaces in this condition and represents a tremendous investment opportunity. Part of an exciting run of Pokemon cards on the market this month. Since its release, Pokemon has quickly become one of the greatest international brands in the world, topping all others as the highest grossing media franchise of all-time with an estimated $90 billion in total revenue. With Poke