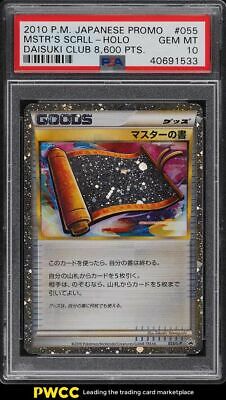 The ultimate fan club prize card ever produced. The Master's Scroll promotional card is a rare and highly sought after item card and is one of the L-P Promotional Cards; a series of Japanese promotional cards tied in with the PokemonCard Game Legend era of cards, which started with HeartGold & SoulSilver Collection in Japan. In June, 2010, this card was available to all Daisuki Club members (fan club) as a Master Rank prize. In order to obtains this final prize you had obtain 8,600 Action Points. Members were able to accrue Action Points by completing certain tasks and can then trade them in for such cards. It's unknown exactly how many members were able to accrue the 8,600 points needed to obtain the Master's Scroll card, but there are only 26 PSA 10 copies in existence, making it one of the rarest promotional cards in the market. The card features a unique diamond like appearance along with a condition sensitive gold border reverse. Since the fan club began in 2004, the Master's Scroll remains one of the most sought after pieces in the market, highly pursued by in