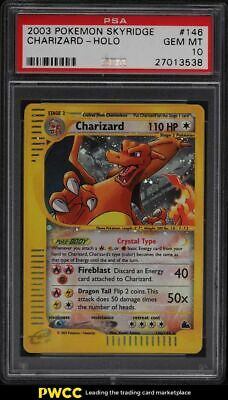 Only released in English for the last two Pokemon sets printed by Wizards of the Coast, Crystal Pokemon cards showcase some of the most beautiful artwork and cardstock ever released in the Pokemon Trading Card Game. The intimidating artwork on the Skyridge version of fan favorite by Kouki Saitou is ranked among the most popular and beautiful of all the Charizard cards produced for the Pokemon Trading Card Game. The immense popularity for this card, and the fact that it was the final version of Charizard to be produced by Wizards of the Coast, make this important piece of history to own, and a spectacular investment piece for any portfolio. Part of an exciting run of Pokemon cards on the market this month. Since its release, Pokemon has quickly become one of the greatest international brands in the world, topping all others as the highest grossing media franchise of all-time with an estimated $90 billion in total revenue. With Pokemon's 25th anniversary right around the corner, coupled with a vastly growing investor following, these Pokemon game cards are set to rise further in value. Easily the most exciting run we've brokered. Comes with PWCC's highest