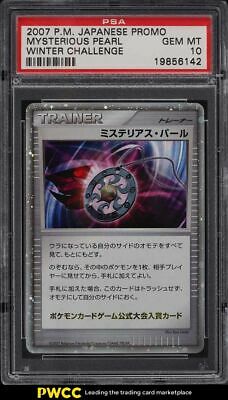 Featuring an absolutely captivating holographic, this "New Back" trophy card designed by Ryo Ueda is simply breathtaking card to see in person. Initially awarded to only the top three competitors from each age group during the Battle Road Sprint 2007 tournaments in Japan, it was also subsequently given out during the Winter Challenge 2007 events. While only approximately 81 copies were initially awarded, the subsequent release of this card makes ascertaining the actual number of copies given out unknown. A fantastic entry in the history of Japanese Pokemon trophy card collecting, the Mysterious Pearl is a worthy addition to any collection or investment portfolio. Part of an exciting run of Pokemon cards on the market this month. Since its release, Pokemon has quickly become one of the greatest international brands in the world, topping all others as the highest grossing media franchise of all-time with an estimated $90 billion in total revenue. With Pokemon's 25th anniversary right around the corner, coupled with a vastly growing investor following, these Pokemon game cards are set to rise further in value. Easily the most exc